I love movies! There’s nothing like going to the theater, getting a big ol’ tub of popcorn, and being entertained for a couple of hours. Movie theaters in Korea are no exception.

For one thing it’s a little cheaper than the U.S. Maybe by only a couple of dollars, but that’s money you could be spending on snacks (which are also cheaper). Of course, snack-wise, you aren’t going to get things like dried squid in your home country, but it’s an interesting option. I always like the popcorn choices because my friends and I each had our own preferences. So for not much money we could each get a topping we liked (such as caramel or butter), and we’d share and be happy.

In pretty much every theater you get to choose your seat when you buy your ticket. I liked that option, though when you go as a couple or group then you risk the chance of being split up. Or you could do what we do here and just ask the people in your row to scoot down a couple seats.

There obviously isn’t going to be every English release when it comes to movie choices. It’s usually the blockbusters. These days, though, we have things like Netflix and options to buy digital copies so you won’t totally miss out on what people are seeing back home. There’s also the thing about there being Korean subtitles on the screen, but I can easily ignore that. Plus, subtitles means less younger children because they don’t want to sit through a movie for 2 hours reading. For kids movies, though, like animated ones that means there are dub tracks. So you may have a harder time finding a time when you can see it in English because those showings tend to be less often. 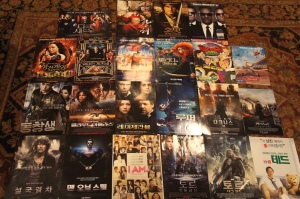 I got addicted to collecting these. They also have them in Japan. I like them because they’re like little posters. I hung a few in my apartment as decoration. I didn’t even see some of those movies! They’re cool though, right?

All-in-all, seeing movies in Korea is pretty nice. It’s mostly the same experience as home, but the little differences make it interesting.

I didn’t see any Korean movies in the theater, but I have seen a couple elsewhere. What’s your favorite Korean movie? I enjoyed “Secretly, Greatly” (은밀하게 위대하게) and “A Werewolf Boy” (늑대소년).